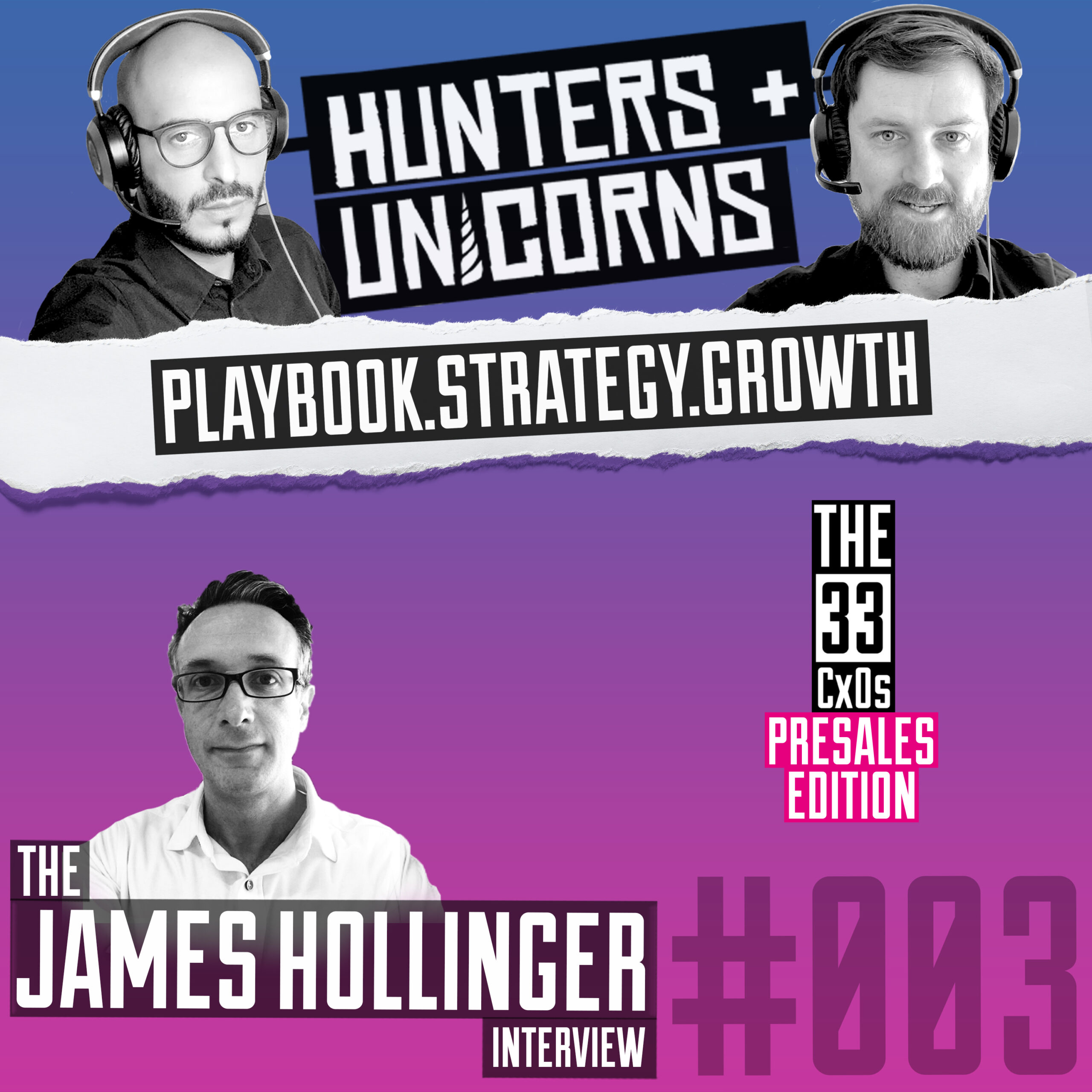 “Leave your ego at home. When you’re out there selling, it’s about the product, it’s about the value, it’s about the company, it’s about the success of everybody involved and it’s not about you. You could be right, that’s a bug in the product and it shouldn’t be there, but guess what? That doesn’t matter. Your goal is to close the deal – who cares if you’re right or not – you’ll deal with that bug later.”  – James Hollinger

In the Presales Edition of The 33 CXOs we explore the crucial role of the presales organisation in what is regarded as the greatest success story in software sales.

When John McMahon took the reins at BladeLogic, he had a clear vision to create a sales and presales organisation that was in complete unison. What transpired became a sales rhythm which remains the gold standard for best practice within the most successful technology companies in the world.

The effects of a value-driven, technical sales function transcended the boundaries of presales. The playbook has helped trailblaze best practice within Customer Success, Value Engineering, Professional Services and even Product Management.

We uncover the stories and playbooks of the most talented technical sales leaders in the industry who are driving the technology companies of the future.

Episode 3 features James Hollinger, VP of Pre-Sales Engineering at Domino Data Labs. James was one of the founding members of the BladeLogic software engineering team. He joined the company in 2001 during the early start-up phase and was instrumental in designing and building their product from the ground up. He then transitioned into pre-sales, and at this point, James’ career began to scale at an extraordinary pace. Positioned at the forefront of the SaaS world, his increasing expertise and ability to communicate value, led him to senior management roles at the likes of BMC, Sumo Logic and Mesosphere. This exposed him to systems and people that continuously expanded his focus and presented opportunities that have enabled his progression from sales engineer through to leader and mentor.

“People might think of the sales engineers as just geeks who want to be doing technology and that’s actually not the case. Sales engineers want to win. We want to close business and we want to make money. We are salespeople first and foremost.”

As a skilled software developer with a natural talent for articulating technology and value, James transitioned smoothly into the notoriously competitive SaaS sales arena, surrounded by intelligent A-Player “Bulldogs.” His background in building automation tools for operations and data centres gave him a unique insight into problems that needed to be solved in the industry, but the leadership and mentoring he received at BladeLogic enabled him to excel in his role. He became an integral cog in the BladeLogic sales machine and used ground-breaking methodology and processes to close deals at an enviable rate.

“I think of the playbook like a golf swing. The more unnatural it feels, the more it’s actually going to work. It’s not intuitive, you’re going to have to fight your instincts and there’s nothing harder for a salesperson to do than “qual out a deal”. You have to make unnatural decisions and that comes down to your coach. If you have a swing coach who is showing you when to make changes, it might feel unnatural, but if you do 70 swings, then another 70 tomorrow etc, the next thing you know, it starts feeling more and more natural. It’s the same thing from the sales methodology perspective.”

Programmed to win, James is an exceptional leader with a unique ability to define and execute growth strategy. He has a maniacal focus on developing the right processes, behaviours and methodologies to drive revenue and customer value. His enthusiasm to continue to learn and remain at the forefront of cutting-edge technology is inspirational for anyone aspiring to succeed in this ever-advancing industry. We discuss the role and potential prospects for presales engineers, past, present and future and ask James what area of innovation he thinks is going to have the biggest impact on business in the next 10 years. This motivating discussion is essential listening for those with an interest in a presales career, as well as anyone with a passion for the technology space.