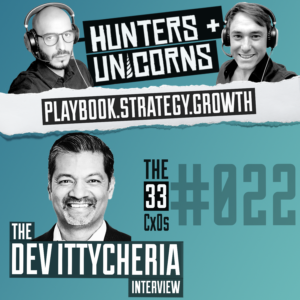 “The lesson I’ve learned the hard way is that the only way you build a great business is by marrying a great product with a great distribution channel. That’s essentially what we did at BladeLogic and that’s what we’re trying to do at MongoDB and when I look at all the great software companies, I can’t think of one who doesn’t have those two elements.”  - Dev Ittycheria

The final episode 22 of this series features Dev Ittycheria, CEO Of MongoDB. Dev has over two decades of experience as an entrepreneur, investor, and leader, specialising in high-growth software companies. Dev joined MongoDB in 2014 and has led the company through some of its highest growth years. Before MongoDB, Dev founded and IPOed two companies—Breakaway Solutions, which went public in 1999 and was acquired by Verizon in 2001, and BladeLogic, which had one of the most successful IPOs of 2007 and was later acquired by BMC Software for $900 million. He has also invested in and served on the boards of many successful software companies including AppDynamics, Athenahealth, and Datadog.

“I’ve seen many execs fail or stop scaling because they feel like they’ve mastered the system and all of a sudden, they hit a wall. The best people always have some degree of doubt and are constantly trying to understand and adapt to what’s happening. You can’t cut and paste from a past experience. Every company has its own unique issues and needs different things as it grows and as a leader, you need to be able to adapt.”

Dev’s philosophy is simple – always be a student of the game. In reference to his earlier career, Dev discusses experiencing imposter syndrome, feeling “caught in a trap of trying to portray that you’re on top of everything” and his inspiring realisation that vulnerability can actually be strength, not a weakness.

“You don’t need to have the answers to everything, you just need to be able to ask good questions and surround yourself with good people.”

Dev accredits his astounding success to having a learning mindset and to the incredible teams and mentors who have helped shape his management philosophy over the years, especially Steve Walski and John McMahon. He is a true believer in the importance of building trust across an organization and creating a strong culture of communication by providing a safe space for teams to discuss, experiment, and give candid feedback.  As a leader, he understands that people mirror how he behaves and is therefore very intentional about the values he sets and creating a meritocratic environment in order to attract and retain great people.

“I consider myself almost like the conductor of an orchestra. I don’t really make the music, I don’t even necessarily write the music, but I make sure that all the different people in the orchestra work well together and that together, we make beautiful music.”

Dev Ittycheria is an inspiration for all concerned in today’s transformational environment of business technology. As the visionary founder behind BladeLogic, he has immense pride for the achievements of his teams and mentors both past and present and continues to redefine great leadership at MongoDB by aiming to create a “company for the ages” by putting a foundation in place so that the company can continue to soar even in his absence.

We discuss Dev’s path into tech, leadership and investing, and gain a unique insight into the behind-the-scenes journey of a company from start-up to unicorn status. This one-off discussion has been a true honour for us and is essential listening for anyone with an interest in sales strategy, as well as a passion for the technology space.