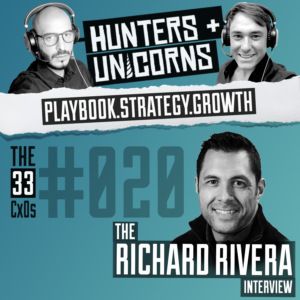 “It comes down to the people in my belief and that is certainly no disrespect to the technology, but it doesn’t sell itself. Big enterprises have so many options to solve their problems and there’s a lot of mixed messages out there. I’m passionate about doing anything I can to help find and develop the hunters of the world, and the unicorns are a fun journey to be a part of.”  - Richard Rivera

Episode 20 features Richard Rivera, Chief Revenue Officer at Vibes. Over the past two decades, Rivera has established a significant track record of success building and scaling multiple disruptive technologies and cloud-based SaaS businesses. He has held prominent revenue-generating leadership roles at firms such as Medallia, Monetate, Dialpad, Fuze, BMC Software and BladeLogic. During Rivera’s tenure, these tech companies have seen 200%+ average revenue spikes during their early to mid-stage growth phases. Richard is now elevating the vision, mission and identity of Vibes, the Gartner Leader in mobile engagement and taking this technology pioneer into its next phase of hyper growth.

“I wasn’t then and nor am I now a technologist. I’m just not that into it. For me, it was leaning into what I do – I came from a football and teaching background so I would just teach, and I would really pay attention to the individuals that I was working with. I got introduced to the concept of a champion and I knew that champion had to have criteria that aligned to my unique value proposition and differentiation, so I knew early on that it was about selling to people.”

When Richard joined BladeLogic under the leadership of John McMahon, he was able to optimise his potential for the first time in his career. As a Sales Rep for leading edge software with zero passion for technology, he relied on his experience as a teacher and coach and connected with the simplicity of a strategy that focused on people and building champions. Even though he says he “wasn’t the best salesperson on the planet and certainly not the best one in that salesforce,” he found a way to survive by connecting with the people he was selling to, having an open mindset, and learning from the elite sellers surrounding him. His dedication to the playbook, deep understanding of the concept of productivity and passion for operational excellence has enabled Richard to drive alignment and commitment throughout his career whilst developing and inspiring his teams, colleagues, and customers.

In terms of the journey to becoming a successful growth company, Richard’s world begins and ends with people. His passion is for more than just sales execution, he believes that “if you expect something out of a leader you’ve got to train and coach it up,” and he is devoted to doing just that. He has taken risks, made mistakes and had a lot of success in his career due to his incredible ability to learn and evolve. We discuss the core pillars of Richard’s playbook, how a 15-minute interview with McMahon changed his whole life and ask him to answer our all-important question: does the hunter make the unicorn? This deep dive into the world of SaaS Sales from the perspective of proven growth technology executive with more than 20 years of experience is an absolute must for those with an interest in sales strategy, as well as anyone with a passion for the technology space.