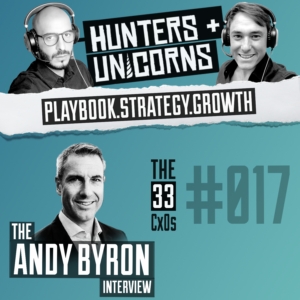 Episode 17 features Andy Byron, President at Lacework. Byron originally had his sights set on a career as a professional baseballer before he entered into SaaS sales. His competitive nature and innate drive to “aim for the top and execute against a plan” enabled him to excel in the sporting world, but his ability to recognise his own strengths and weaknesses led him to follow a different path and adapt his skills to software sales. Since making the transition to tech in 2004, Andy has developed a reputation as an outstanding leader with a track record of go-to-market success with innovative, fast growth start-up companies, building and managing successful sales teams for organizations including VeriCenter, BladeLogic, BMC Software, Aveksa, Fuse, Cybereason and CRV. He is now leading the sales and marketing teams for Lacework, driving their mission to be the global standard in cloud security with a personal objective to enable talent and create a legacy for himself.

“Early on in my career it was about making money, then it became about, how can I show that I can lead people? At this point in my career it’s about, how can I create a legacy where when I look back, a lot of people can say, “Hey, Byron was a fair leader, maybe not the easiest person to work for, but he was fair, and he enabled me to do things that I never thought I could do in my career.”

Accustomed to instant success in his sporting career, it took Andy a while to master the subtleties of selling technology and adapt to a new level of endurance and persistence in the SaaS arena. When he joined BladeLogic, he was surrounded by people that “pushed each other every day to be the best that they could be” and with John McMahon as his mentor, Andy became a student of the game, relentlessly focussed on four key areas that were to become the pillars of his playbook – recruiting and retainment, training and enablement, pipeline and territory management and accurate forecasting. The implementation of these playbook elements along with his unique leadership style centred around purposeful interaction and an open mindset propelled Andy’s career forward and paved the way for his remarkable success in this industry.

Andy Byron understands exactly how to build a first-class sales and marketing team. We discuss his extraordinary career journey from Individual Contributor to President and how his focus has changed over the years. Offering advice for next generation sales leaders, we delve into playbooks, legendary leadership, and ask Andy what key ingredients he thinks are needed for a company to reach unicorn status. This wide-ranging discussion is essential listening for those with an interest in sales strategy, as well as anyone with a passion for the technology space.