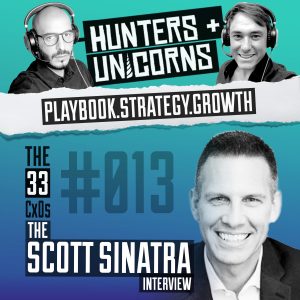 Episode 13 features Scott Sinatra, an accomplished CRO, investor, advisor and mentor with over 20 years of experience leading and building word-class enterprise software sales teams.
Scott’s SaaS career began at PTC in the 1990s. After reading an article in Forbes Magazine about their “elite team of sales athletes capturing the market,” he was instantly attracted to this challenging industry and the opportunity to be surrounded by a next level sales force that he could learn from. He took a job as an Individual Contributor so that he could learn the ropes and master the science of selling and since then, his career has taken an upward trajectory. He went on to hold senior sales leadership positions at Bladelogic (IPO 2007) and BMC Software (acquired Bladelogic 2008). He also served as Senior Vice President of Worldwide Sales at Glassdoor and was, until very recently, leading global expansion at Glint as Vice President of EMEA.